Snooker is a sophisticated cue game. The players score points by potting the balls in a certain order. Points are also awarded when one’s opponent commits a foul. A player can provoke an opponent’s foul by making a snooker — a situation when it is particularly hard not to fail. The higher score wins.

Below is a way to display the flow and the results of a snooker tournament: 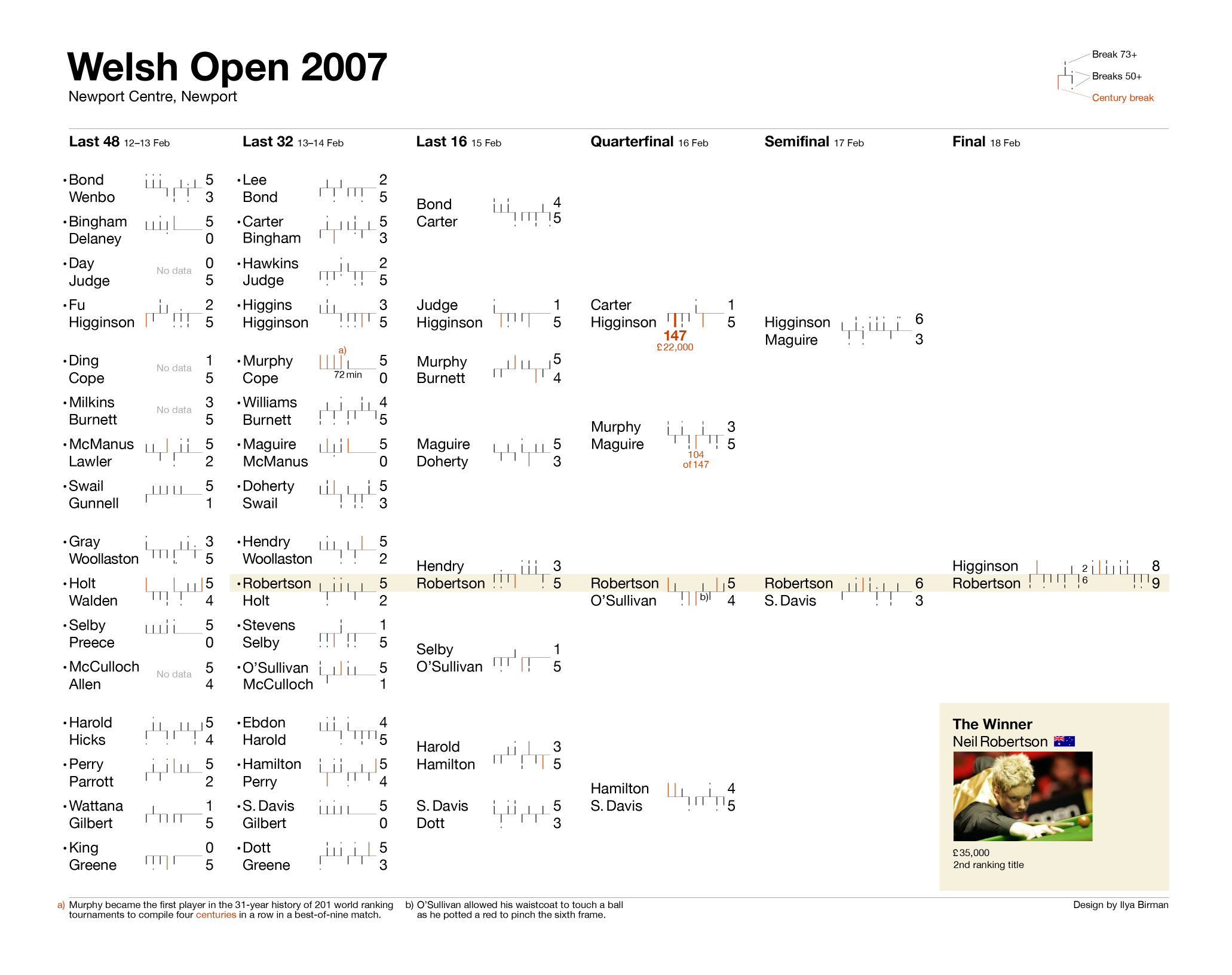 One game of snooker is called a frame. A snooker match consists of a number of frames. Here, the matches are represented by sparklines which show the results and the main features of each frame:

Ronnie O’Sullivan took the first three frames, making a 70 break in the second one. Mark Selby fought back, but after the mid-session interval Ronnie won another two with the breaks of 100 and 80, making his way to the quarterfinal.

Long matches are split into sessions of up to eleven frames. The sessions have a fifteen-minute interval after the first four frames. Horizontal lines and intermediate scores display this structure. In this tournament, the only match that required more than one session was the final. It was not decided until the last frame:

Lagging four frames after the first session, Andrew Higginson won impressive six frames in a row in the second one, taking the score to 8:6. He was one frame away from the title, but Neil Robertson turned out to be stronger and took the remaining three frames.

A break is a number of points scored in one visit to the table. Though how the points are scored plays no role in the result, higher breaks indicate higher game quality (and are fun to watch). The breaks of 50 or higher are interesting as big, round numbers. The break of 73 or higher is notable as it leaves less than 73 points available on the table. Thus, the player who makes such break cannot lose a frame without committing a foul (a situation involving free ball where this would not be the case is very rare). Marking the breaks improves the informativeness of the display and provokes curiosity:

Neil Robertson lead 0:4 by the mid-session interval, having made a century in the fourth frame. Steven Hendry made a comeback and took three frames in a row, getting the score to 3:4. Neil managed, however, to stop Steven and won the eighth frame and the match.

In this lightning-fast match with Jamie Cope, Shaun Murphy became the first player in the 31-year history of 201 world ranking tournaments to compile four centuries in a row in a best-of-nine match.

147, or a maximum is a break of all balls potted in the most effective order. Maximums are scarce, so they deserve a special mark:

The subsequent runner-up Andrew Higginson compiled his first professional maximum in his quarterfinal match with Ali Carter and won a £22,000 prize for it.

Stephen Maguire was on track to compile a maximum in the adjacent match with Shaun Murphy, but failed to pot the 27th ball of 36, scoring 104.

The dots • indicate the point in the tournament where a particular player was seeded:

The sparklines of each match are arranged to form the tournament draw. But they are not centered relative to the matches of the previous stage.

Instead, they are aligned by winner:

With this display, you instantly see who and how any player won on his way through a tournament, up to the stage where they lose: