At borders in the European Union there are signs with the used speed limits. Any Dutch settlement has a mill in it: 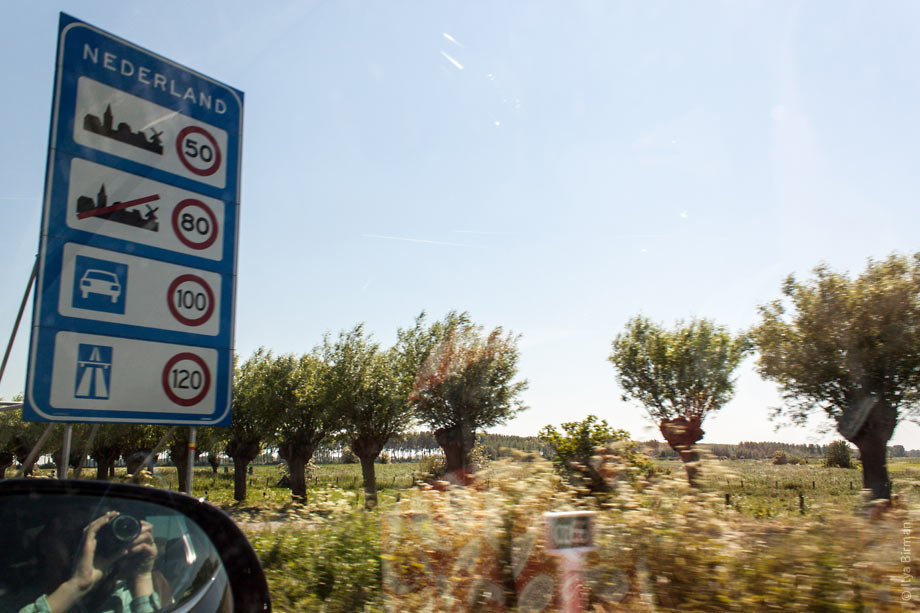 The road N57 goes through the islands of Zeeland over the dams of the project Delta (flood protection) and uses a new road marking.

The speed limit is 60 kilometers per hour here:

One must drive in the middle of the road, leaving the edges for the cyclists and using them only for passing oncoming vehicles. Such a marking leaves the opposite lanes unseparated to make you drive slower and with additional attention.

Two central line and dashed borders mean the limit is 80 (the explanatory signs are here and there): 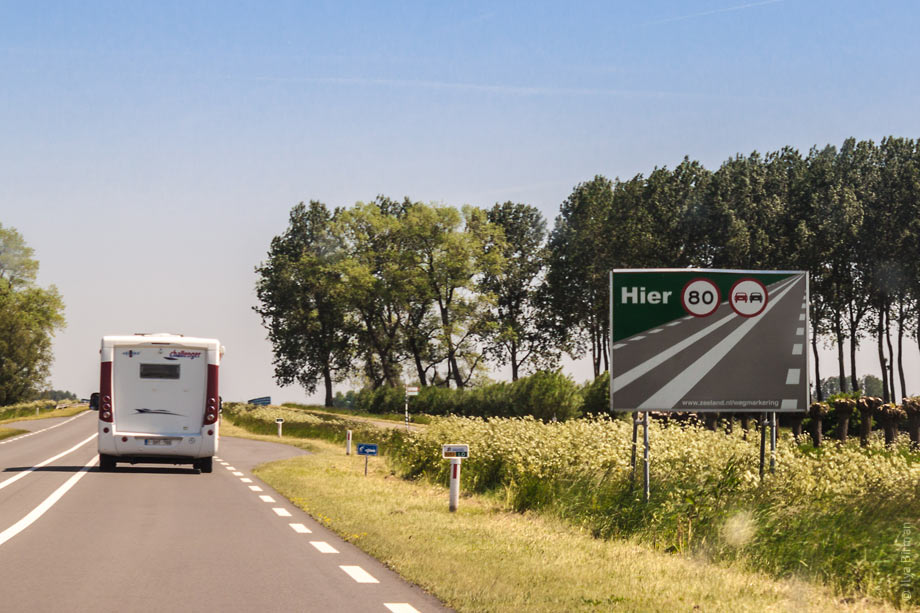 A green stripe between the central lines and solid borders allow to drive at 100 km/h: 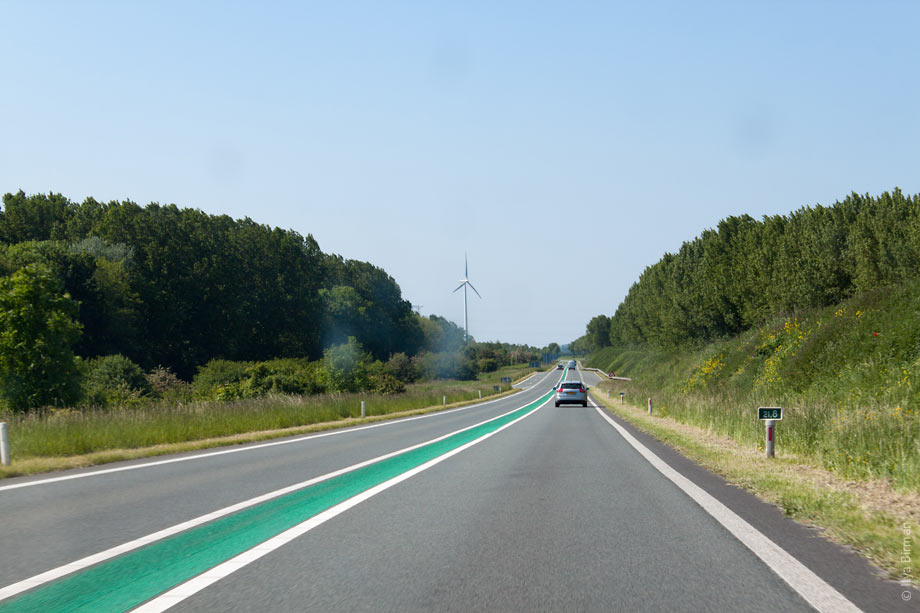 By 2015 the new marking is planned to be used all over the country.

Columns with dangling cat’s eyes are installed along the highway. The wind makes them twinkle in darkness: 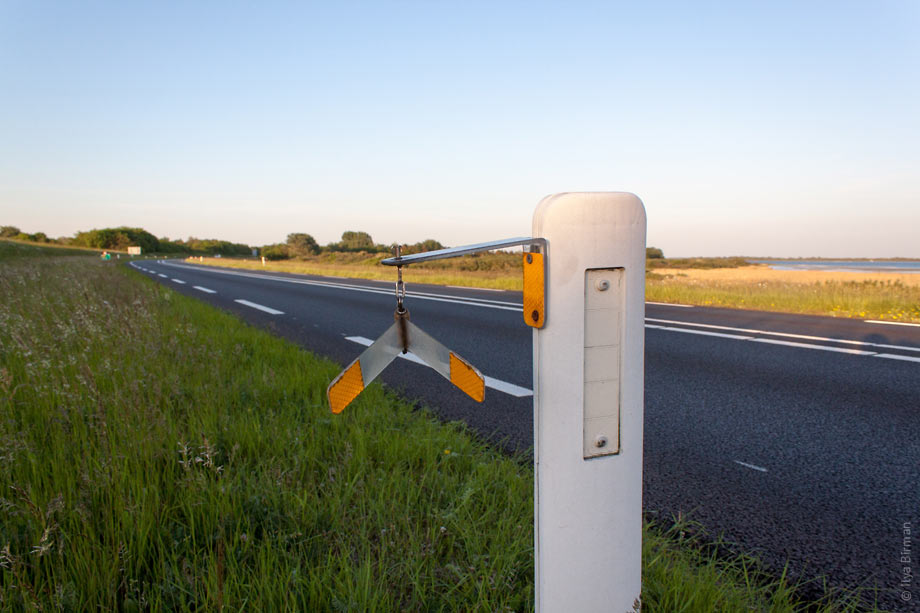 Distance marks include the road number (and sometimes the speed limit): 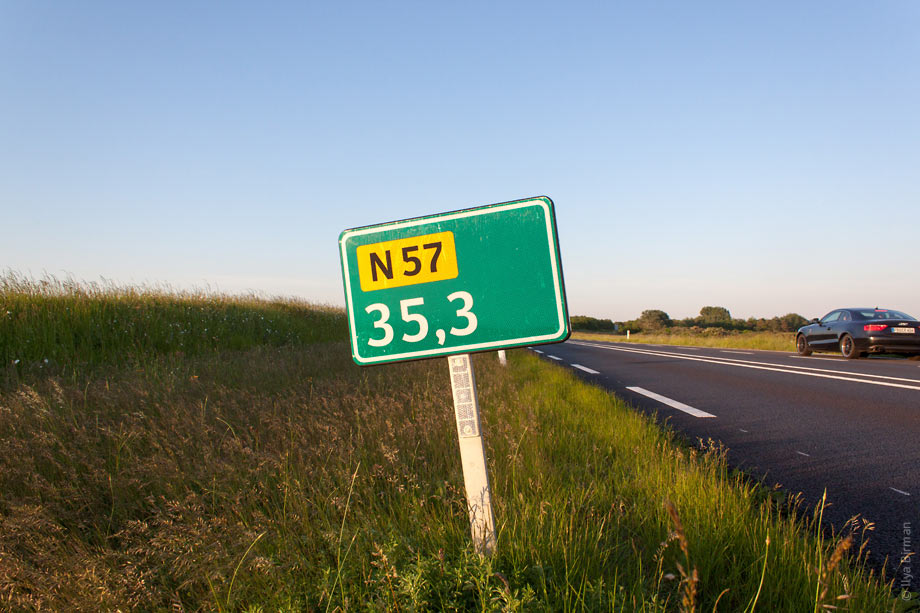 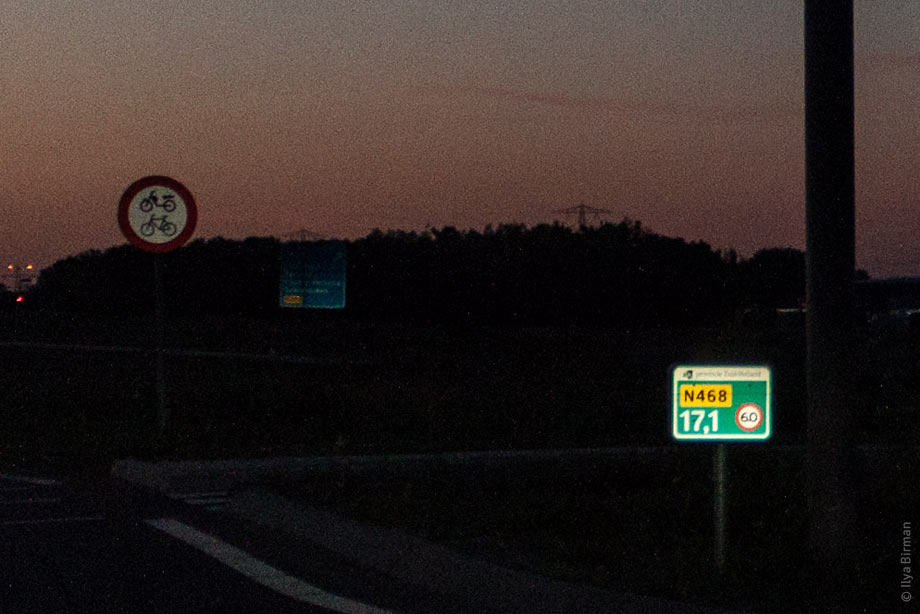 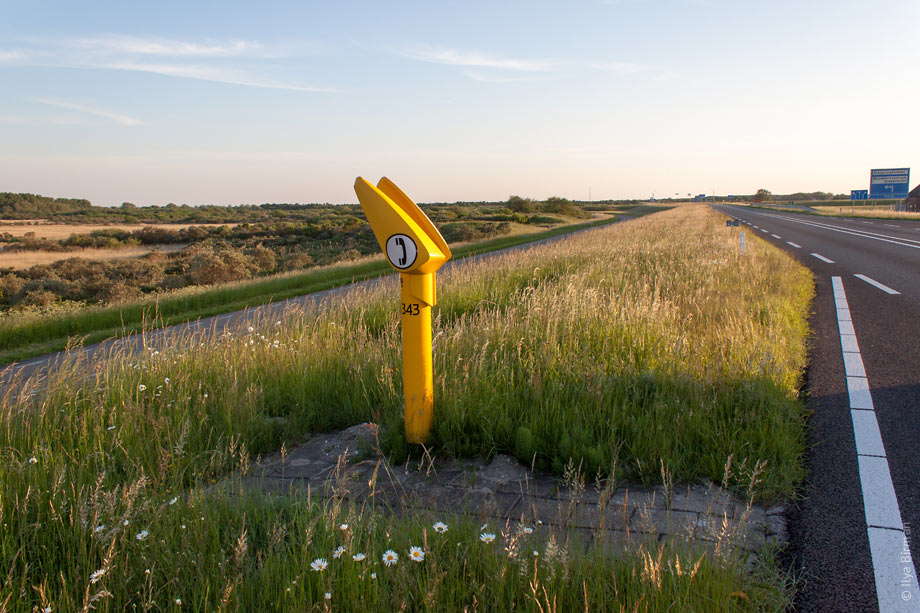 Road crossing with a traffic light: 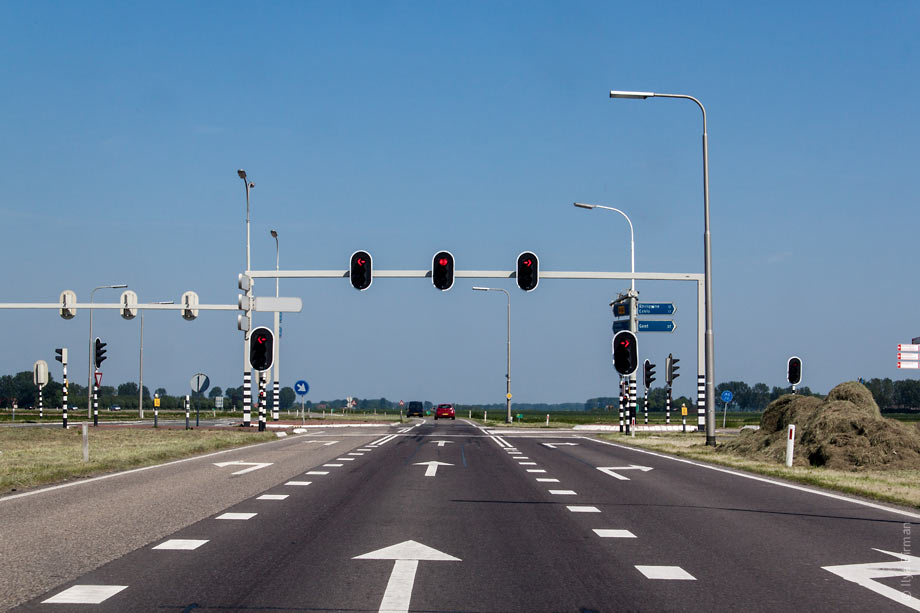 A roundabout (to remain on N57, you need to go left, not forward): 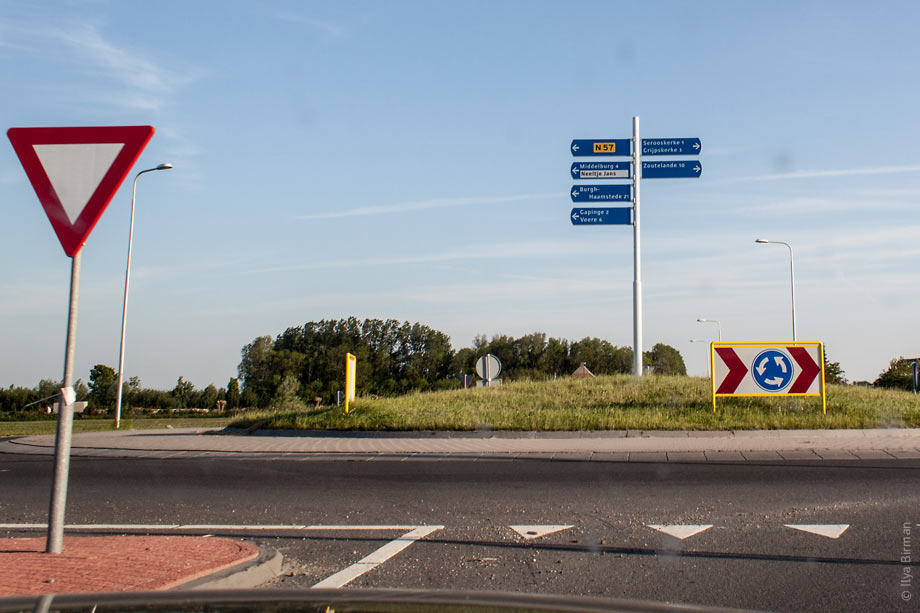 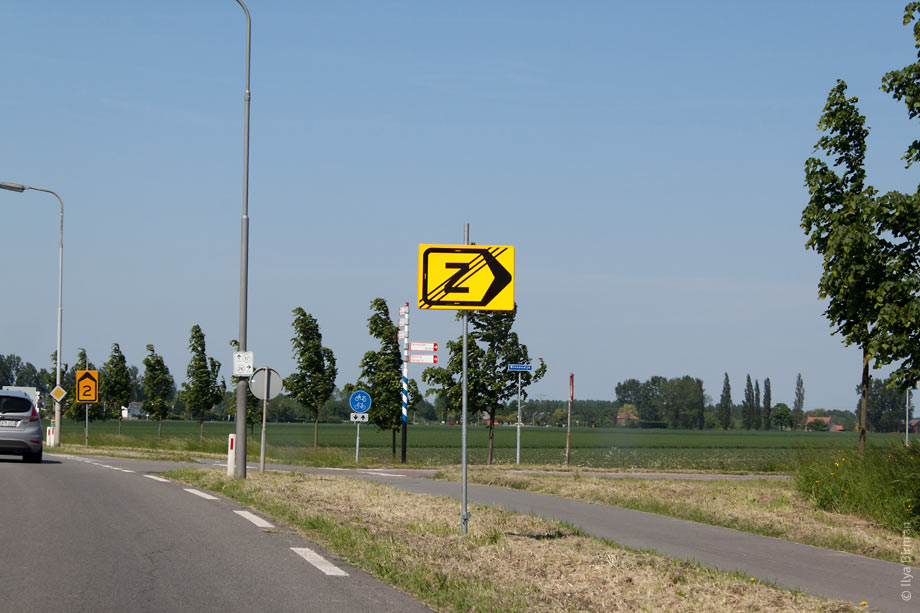 The small red signs far off are for the cyclists. There are bike lanes along highways as well as within cities. 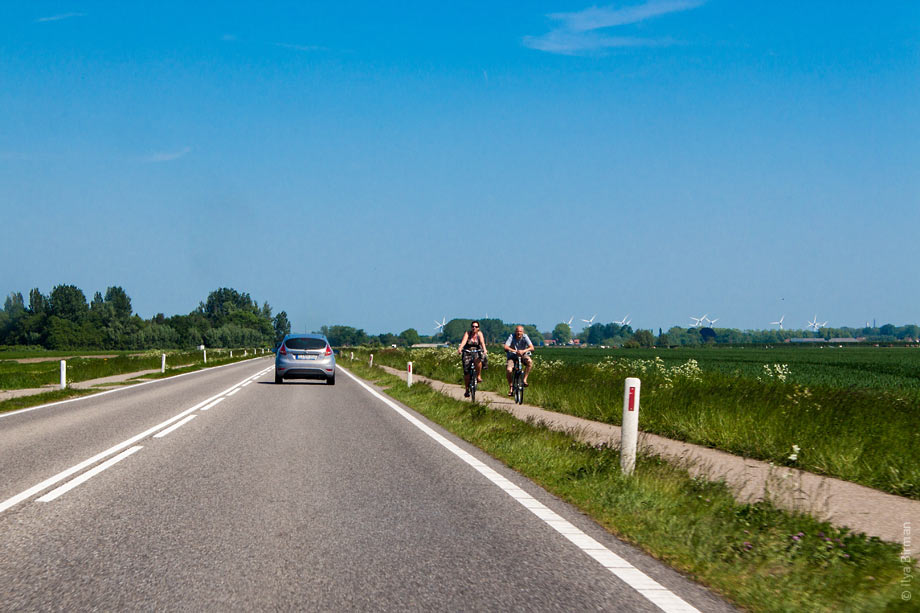 Rail crossing (bike lane has its own barrier): 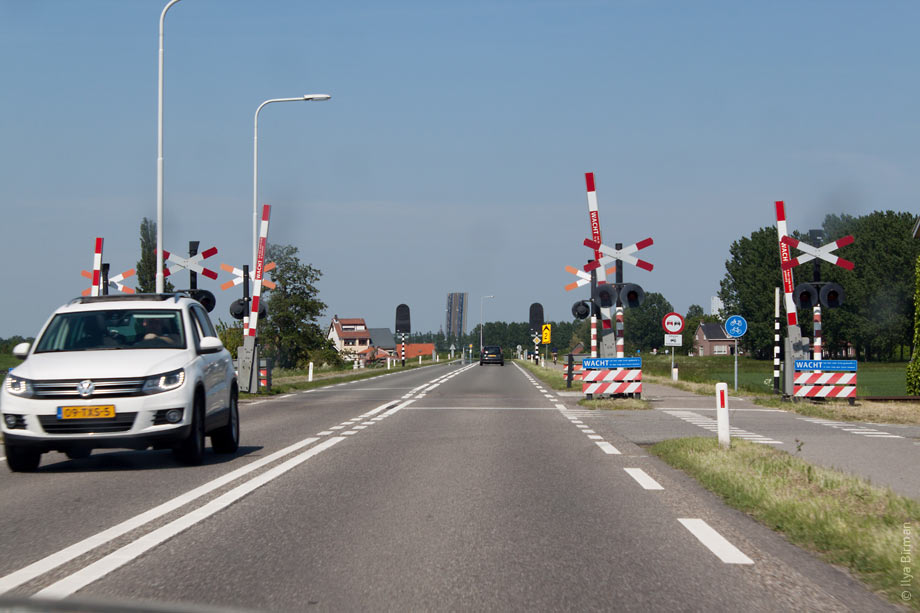 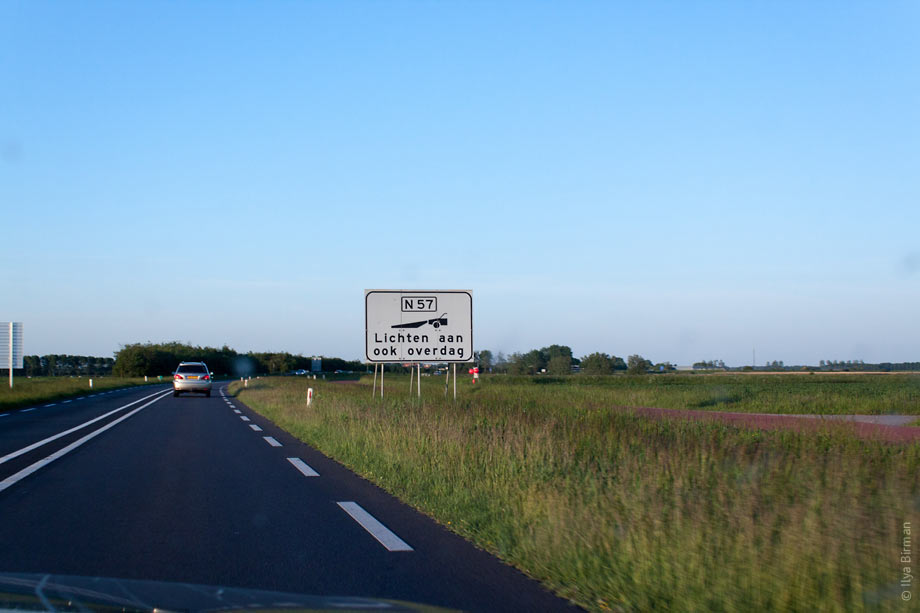 Then there was Vlissingen (read a separate story).

A parking lot at a dam separating the Veerse Meer lake from the North Sea: 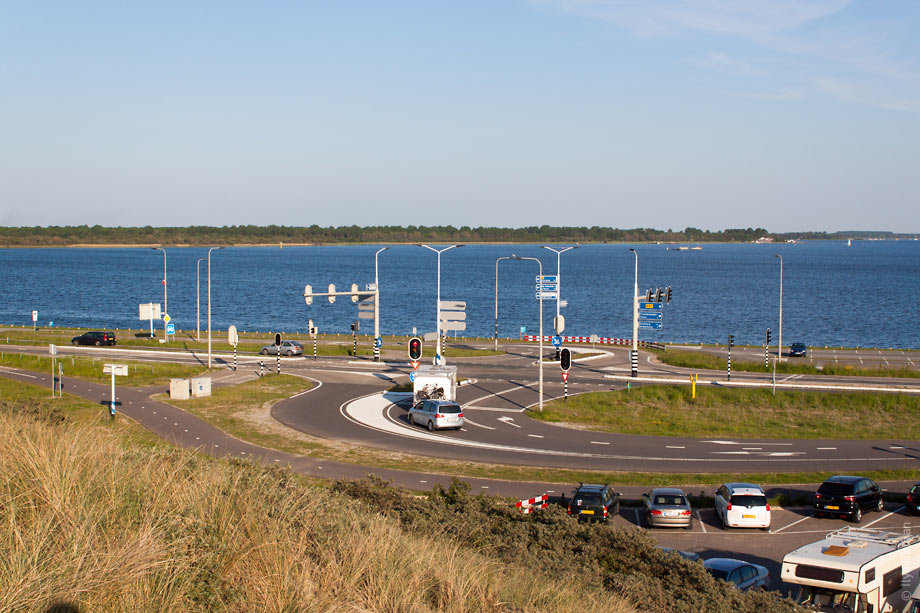 The beach on the other side of the dam: 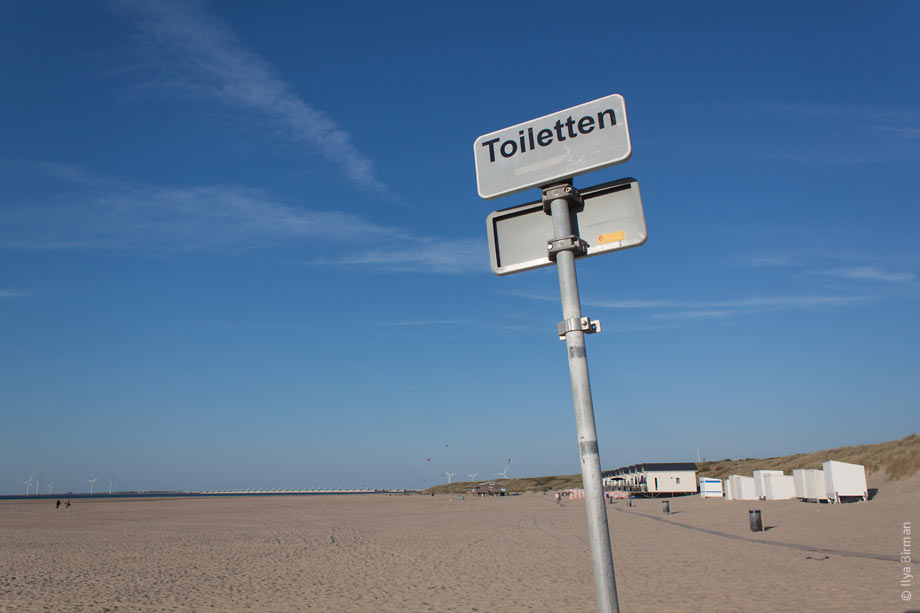 Five minutes on the beach: 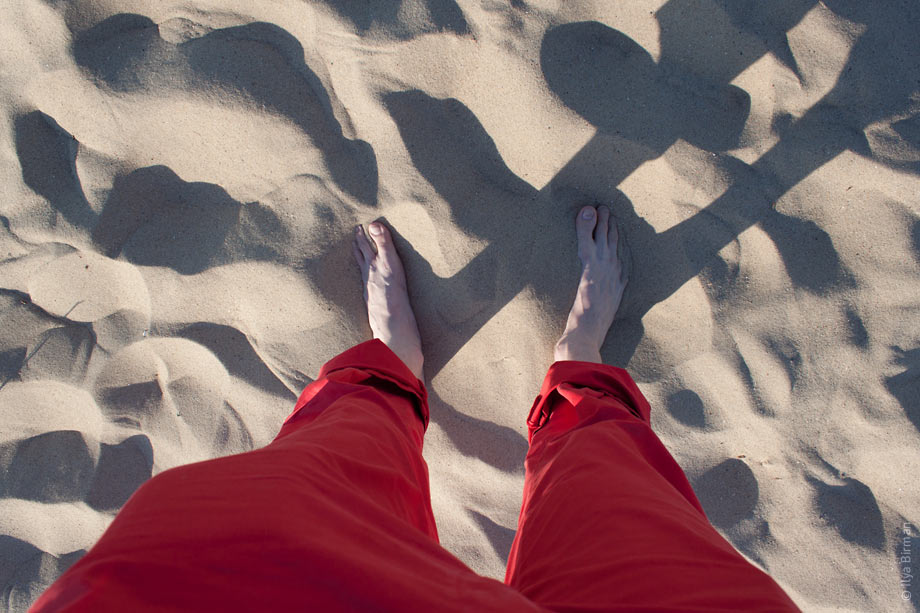 Part of the way went through Europort. I had no idea a port can be so gigantic. 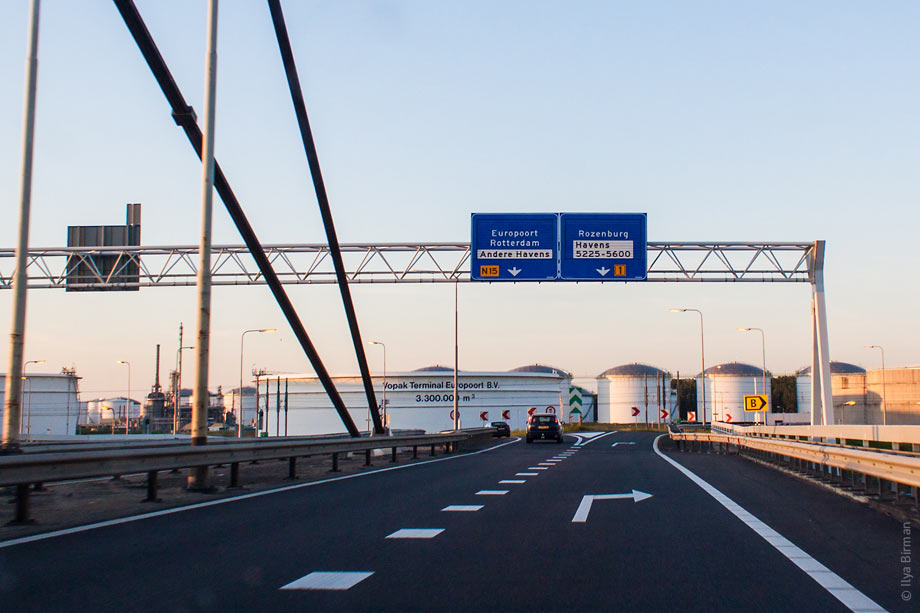 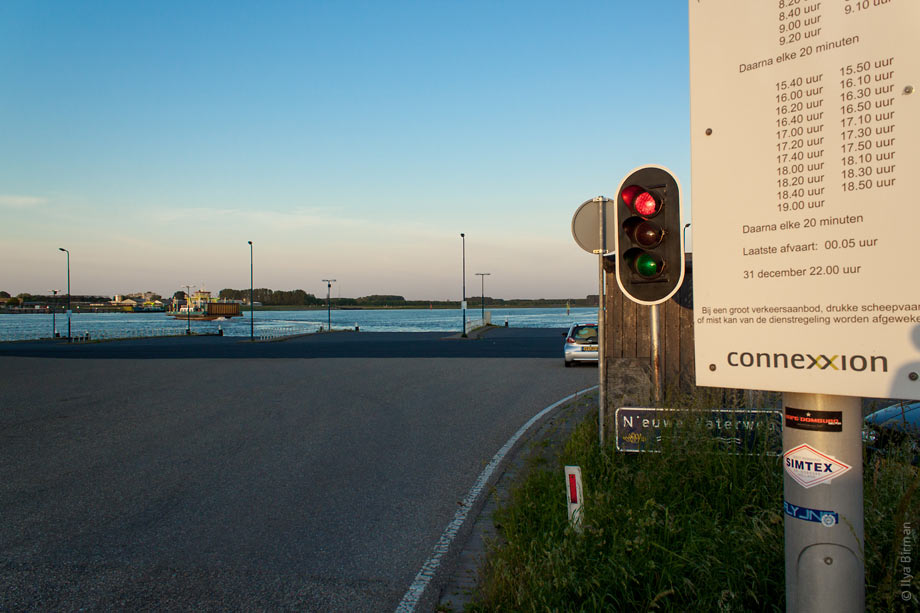 View from the captain’s bridge: 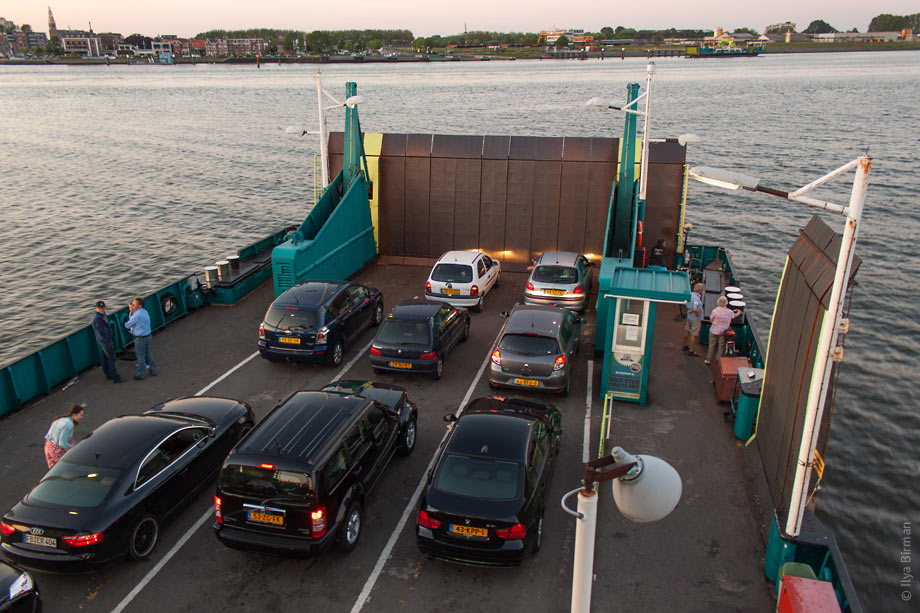 Next stops — The Hague, Amsterdam and Eindhoven.

Letters and numbers on the Dutch license plates are very pleasant to touch (yes, I did touch them): 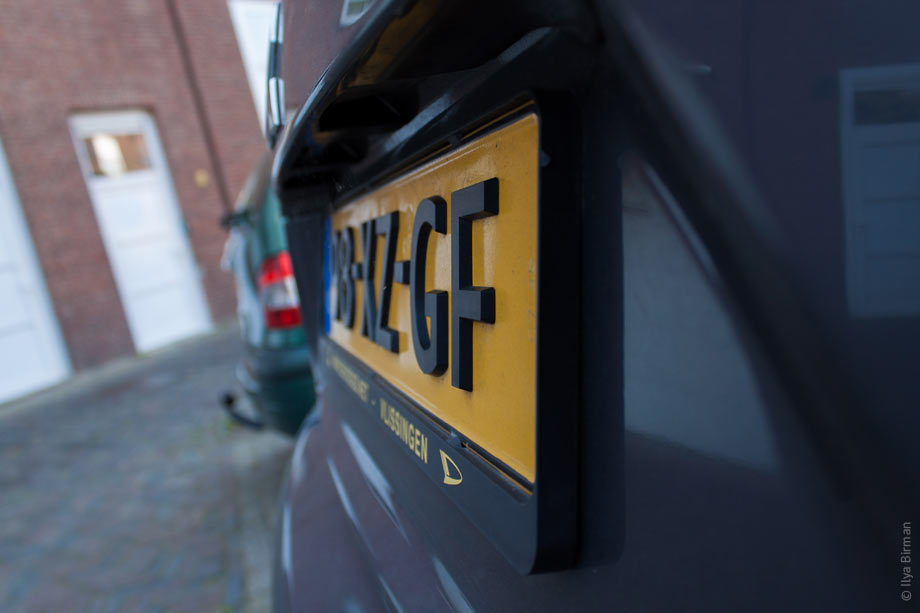 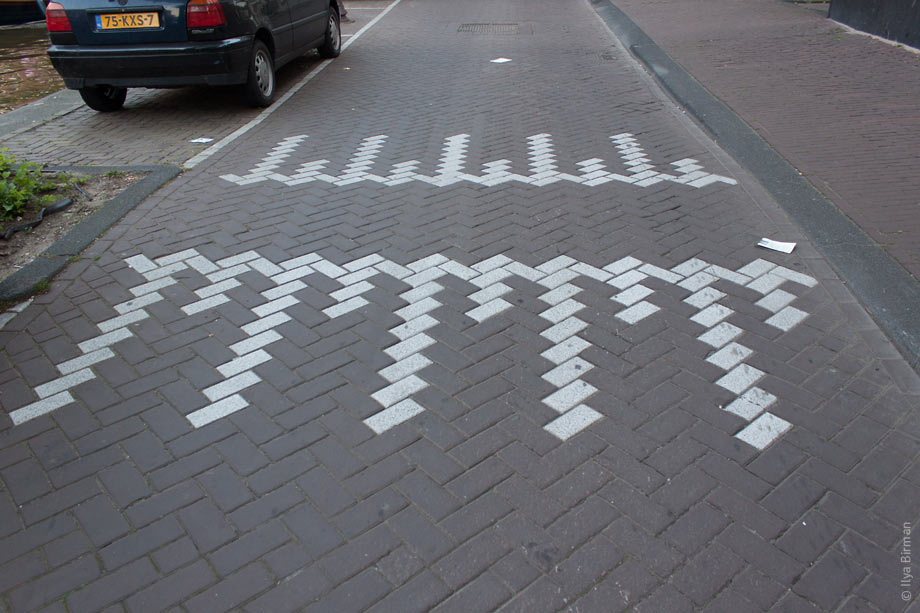 Many crossings within the cities are elevated to the walkway level: 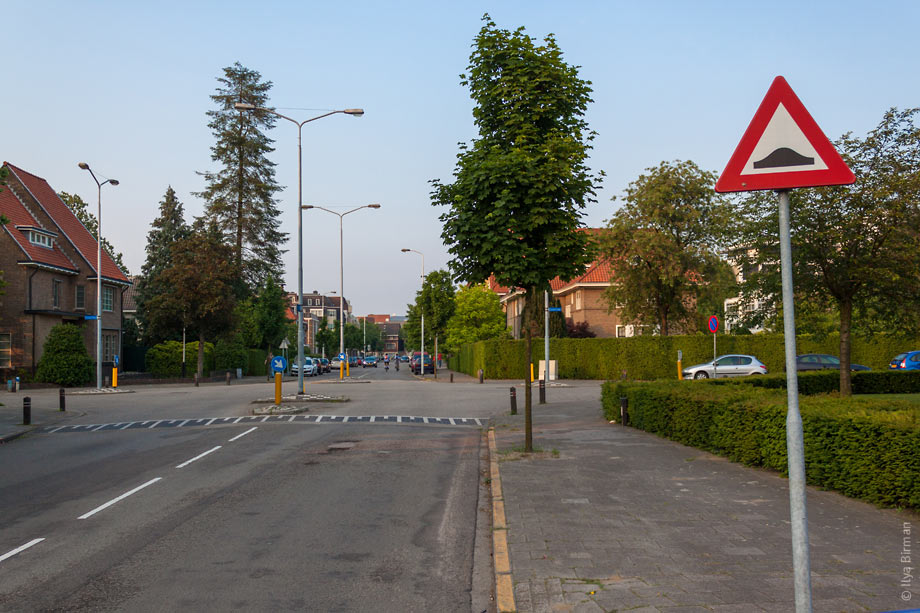 Another way to improve security for pedestrians is to force the drivers to reduce speed considerably by making it impossible to cross the road in a straight line: 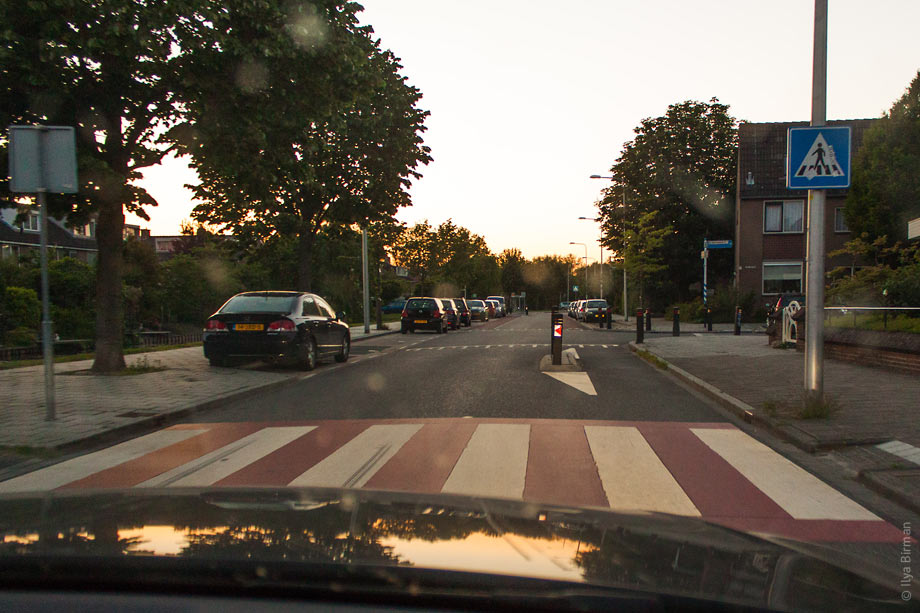 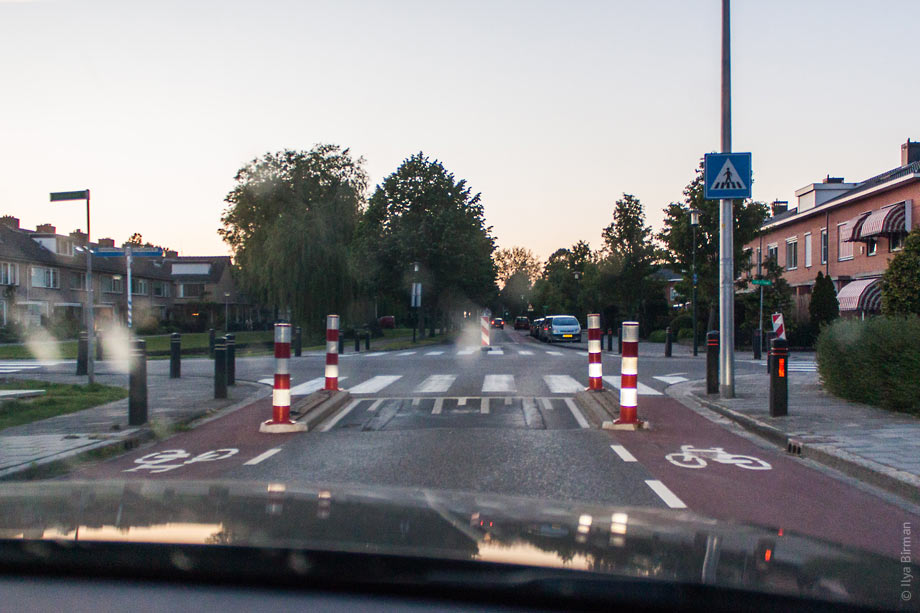