Wait, you mean they print this every day?

John Gruber telling a story about two young women and a newspaper on a counter in Starbucks:

I’m gonna just say there are twentyish. And they had a New York Times on the counter in front of them. And one young woman was explaining to the other — and I know it sounds comical, and I don’t think she was stupid, but I think she grew up on the Internet. I wouldn’t be surprised if she was in fact a college student, I don’t think she was living in a cave or something.

But the one really had no idea what a newspaper was, and she said to the other one: “Wait, you mean they print this every day?”

And the other one says: “Yes, exactly”.

And the other one goes: “Why would they do that?”

And she was clearly impressed.

I am also twentyish (okay, I’m 28) and I am also impressed. I find it amazing that people still print stuff. I have no reasonable explanation as to why would anyone buy a newspaper, unless they are a designer liking the layout. I was profoundly surprised by Apple’s announcement of Airprint a couple of years ago: it felt like I was taken back to the 1990s — by Apple, that is. Printing, Apple, are you serious? Come on.

Apparently, printing is still a thing.

Anyway, I was thinking lately: what will look really weird when one watches a today’s movie five or ten years from now? A criminal taking a SIM card out of a phone and throwing it away probably will. What is that thing, right? Or taking an SD card out of a camera to secure the pictures. Why, aren’t the pictures online already?

Fast forward some more years, and we’ll hear questions like, why does he need to hold this thing next to his ear to talk to someone? Why is she holding this thing in front of her saying “cheese” to her children? Why is he holding that round thing in his hands when riding a car? Why does she look so old if she is just 80 years old?

The future is awesome. 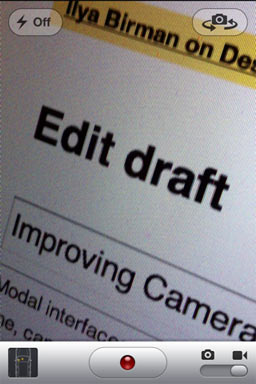 Improving camera UI in iOS
123   2012
Linking to where I already am
Every web designer knows that no hyperlink should ever reference a page where I already am. Ah, not true
198   2012
Ctrl ←Paris road marking experiments
Ctrl →The hope for a beautiful iPhone