Splash screens are useless: they don’t solve any user’s problem, they shamelessly invade the user’s world, they draw additional attention to the fact that the user is waiting. There is no point in advertising your product to the person trying to actually use it.

In mobile apps splash screens are particularly out of place: they occupy the whole screen and the user has nothing else to look at. The phone is being slow, and a nice picture (which I’m undoubtedly looking at) tells me whom to blame. Isn’t it a huge marketing success?

iPhone’s standard app launch image is its screenshot. While the app is launching, the user has a couple of seconds to look at the interface and prepare for action. It appears that the app has launched instantly. According to iPhone’s Human Interface Guidelines all apps should behave like this, it’s even stated explicitly that you should not use splash screens. Unfortunately, this is the rule which Apple does not enforce, and so sometimes stupid apps with splash screens make it into the App Store.

If you find yourself drawing a splash screen, better do something useful, e. g. meet the programmer and discuss the potential design changes to make startup time shorter. 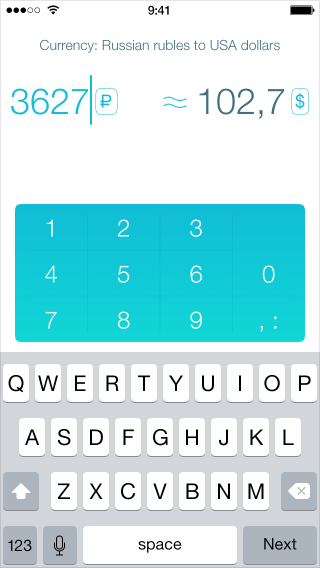 Ångström: the update animation
One of the objectives of the design of Ångström was getting the result as fast as possible. But we’ve confronted a problem with currencies
255   2014