I’m very excited to unveil my future book, “User Interface”, which will be released by Bureau Gorbunov Publishing.

Below are some spreads from the book.

The explanation of Fitts’s experiment opens the chapter on aiming: 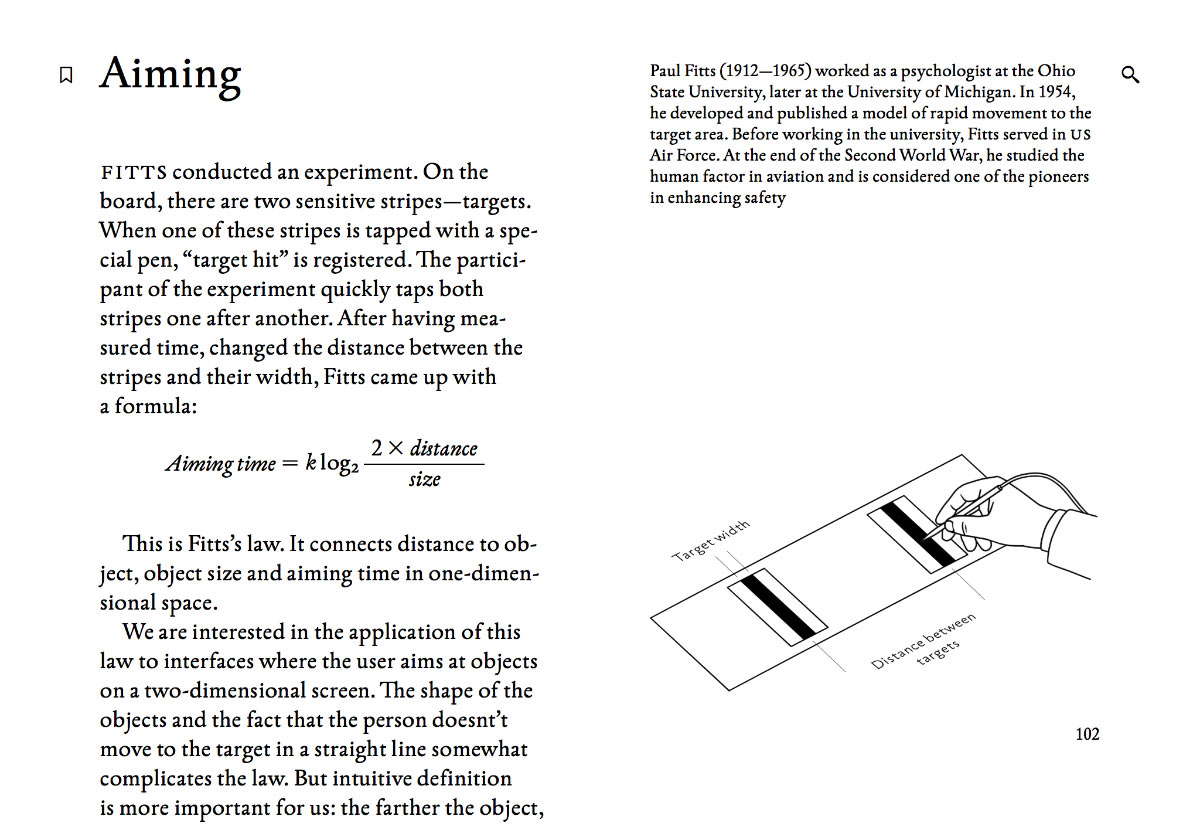 Informativeness and the myth of seven elements: 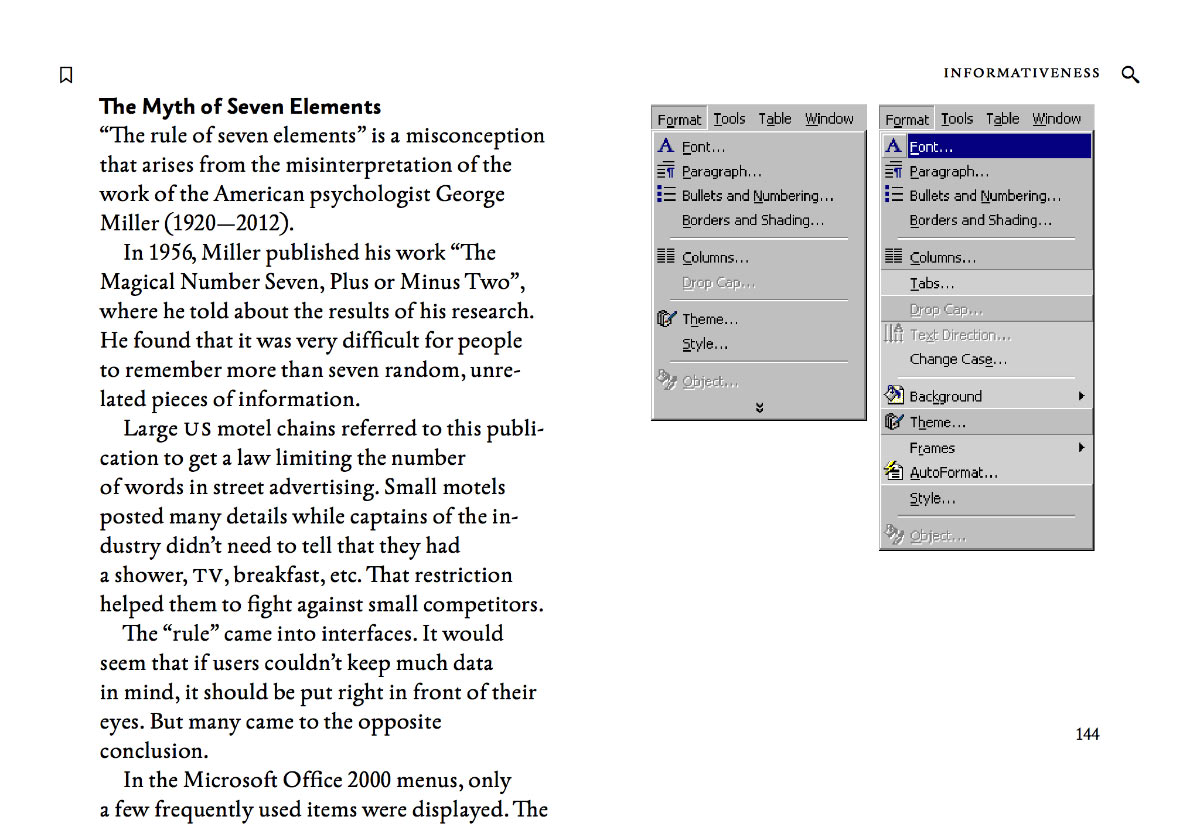 One of the brilliant historic examples of how to provide instant and continuous feedback: 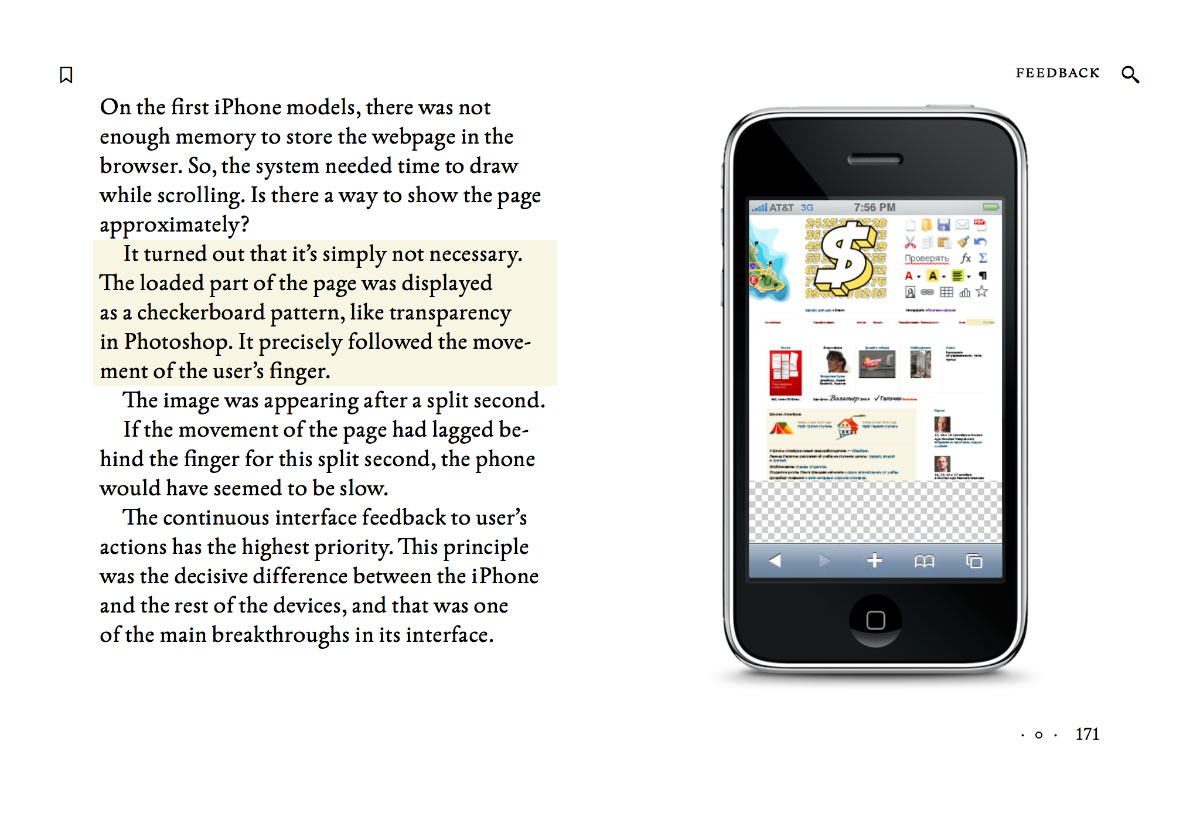 One of the topics is the User Interface Syntax. Here, I’m talking about a notable exception to “command equals verb” rule: 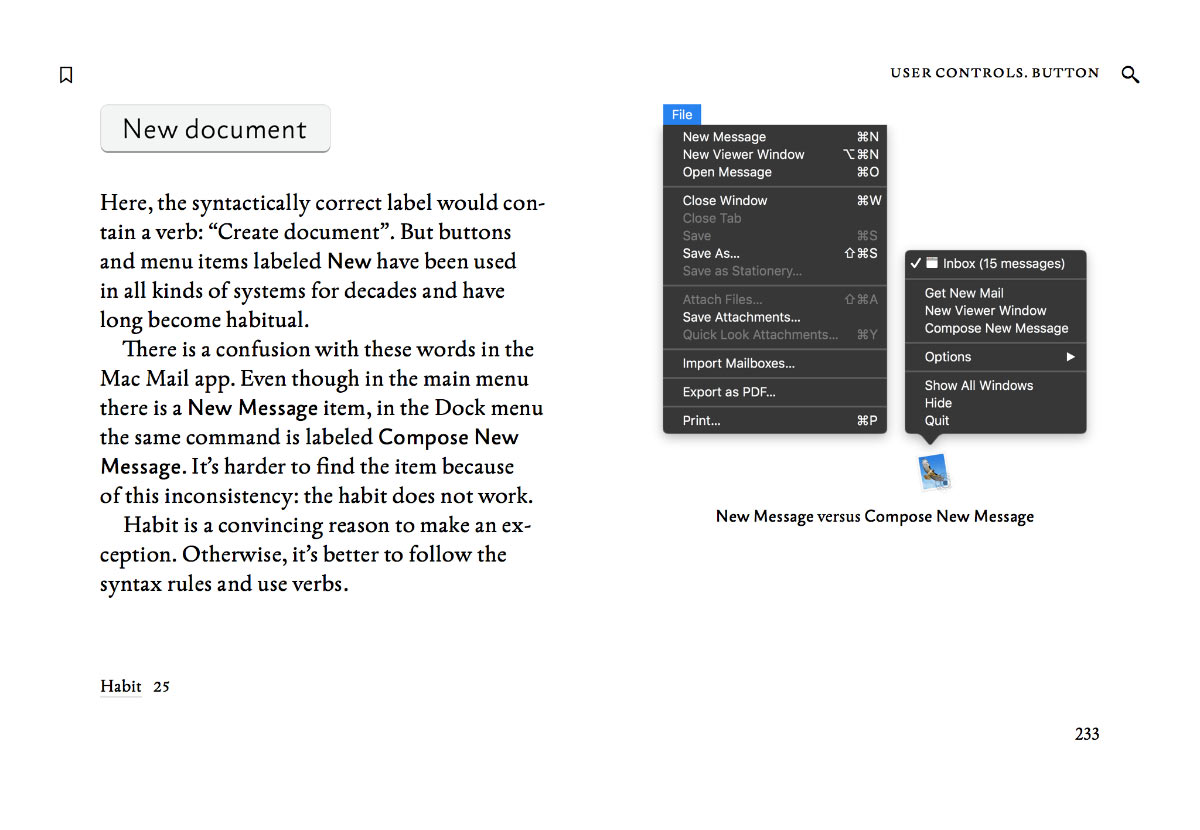 This one is just beautiful: 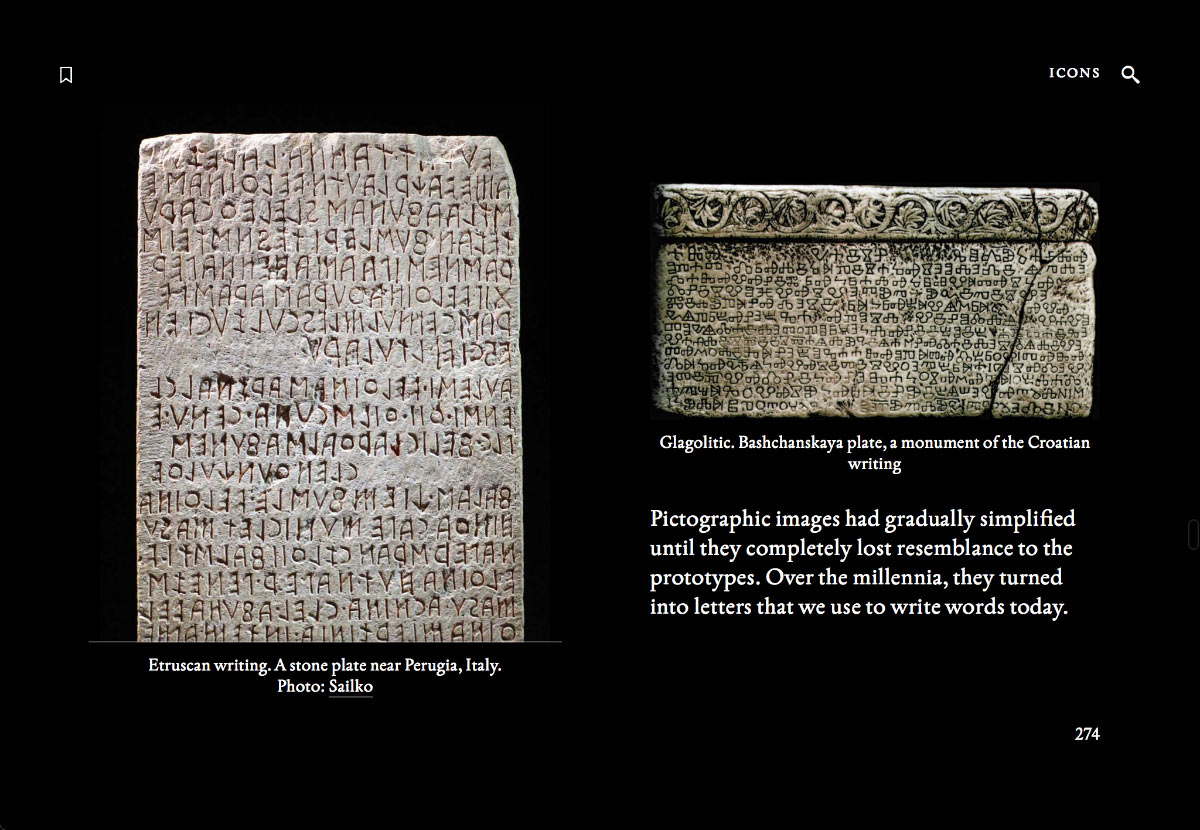 In the chapter “Windows” I show many examples of thoughful workspace organization: 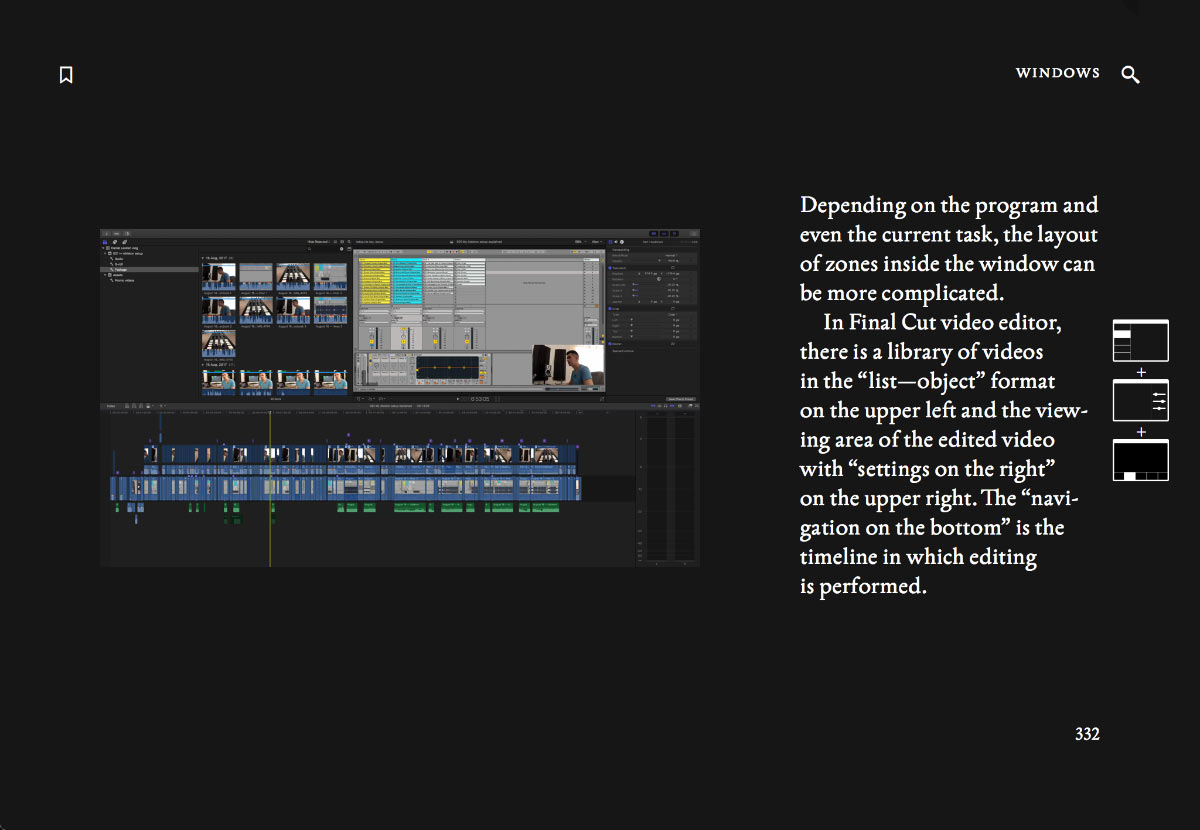 When the user hasn’t filled a form, the main button is usually disabled. This is not always a good idea: 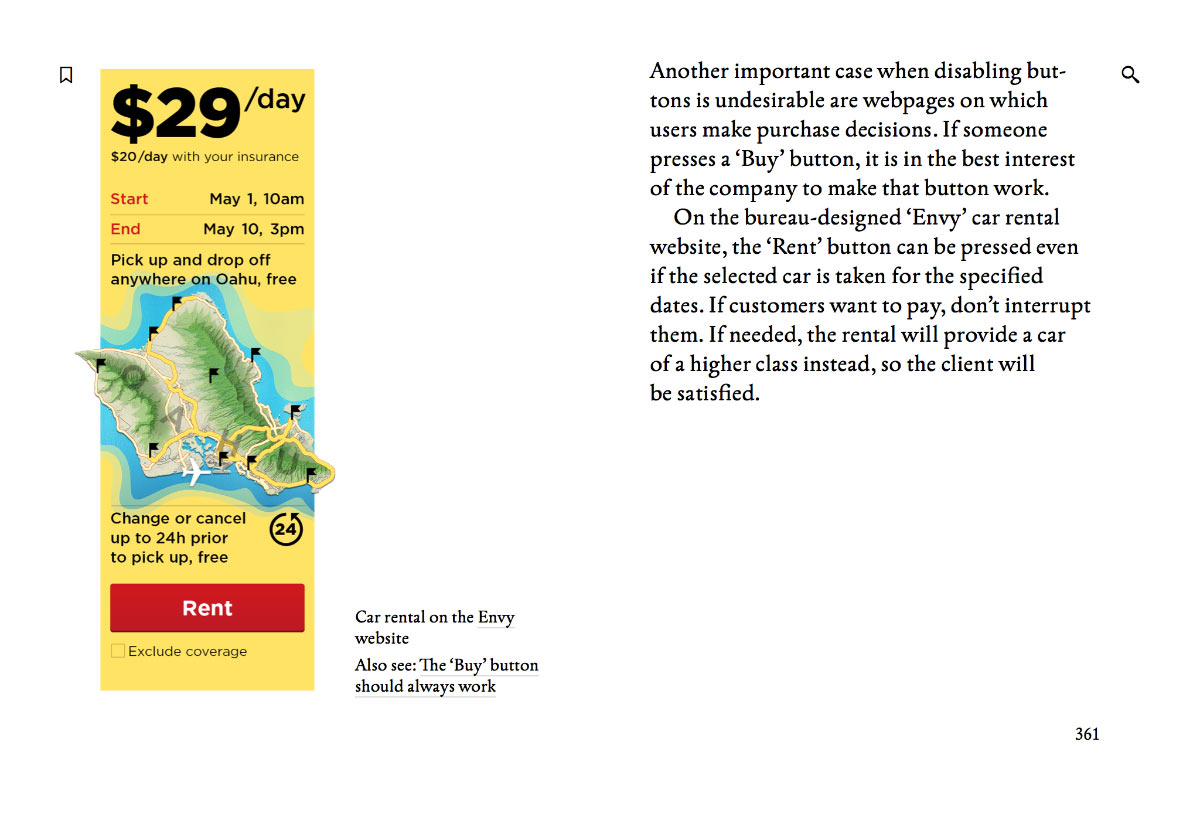 The beginning of a chapter on using a grid: 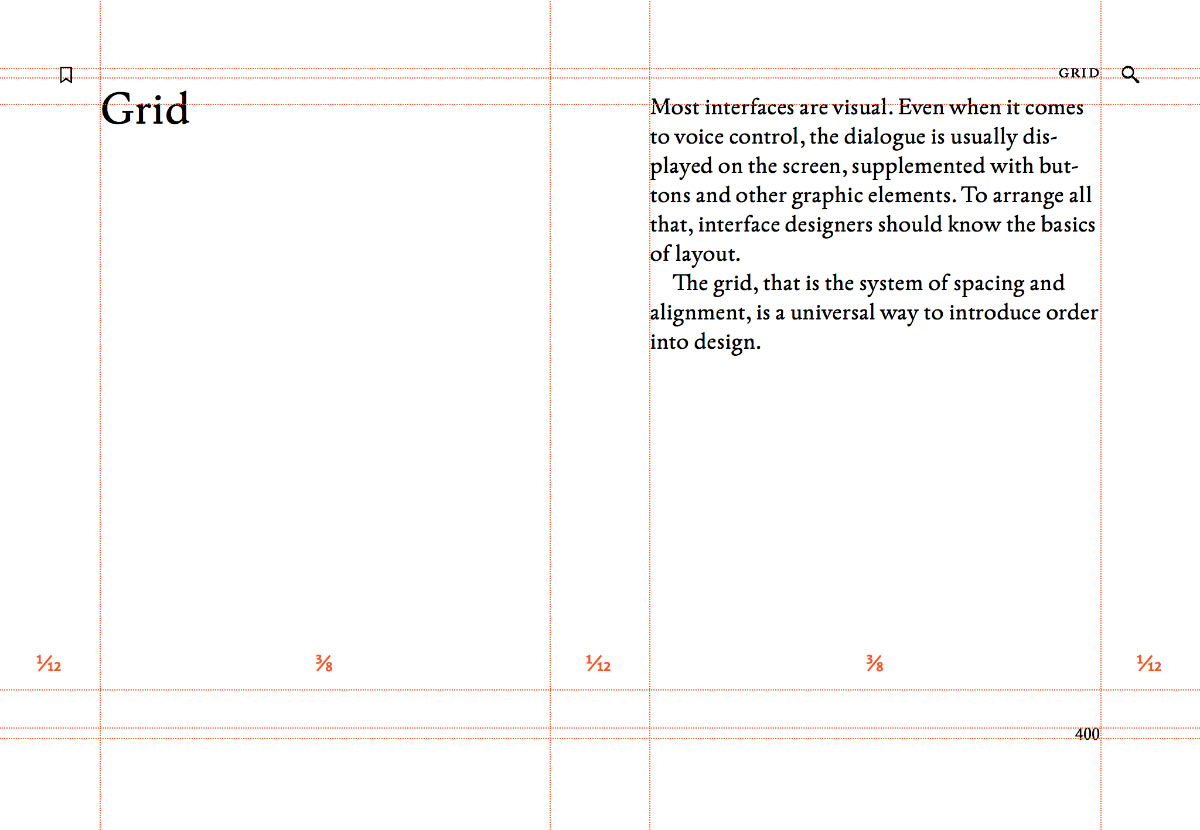 And here’s just a small part of the book’s table of contents: 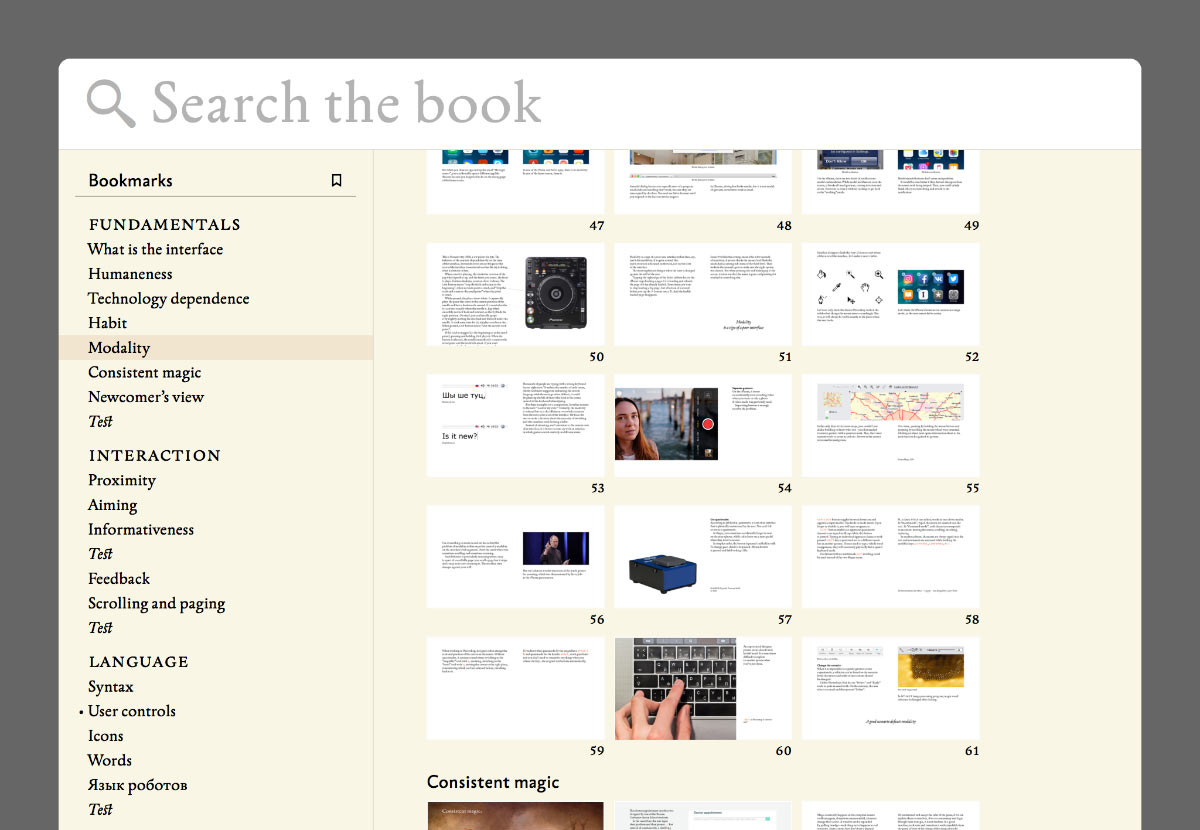 Please go and see the page about the book yourself.

Leave your email address to be notified when the book is out.

I am listening to an audiobook on Steve Jobs. A quote about blunt criticism:

That’s why “That’s shit!” was as common response from Steve as a pointed question or a thoughtful discussion. He wanted smart answers and he didn’t want to waste time on niceties when it was simpler to be clear, no matter how critical his response.

“The reason you sugarcoat things is that you don’t want anyone to think you are an asshole. So, that’s vanity”, explains Jony Ive […] “As a design chief, I was on a receiving end of Steve’s blunt criticisms as much as anyone”. Whenever he felt abused he would tell himself that someone who sugarcoats his true opinions might not really even be all that concerned about the other person’s feelings, he just doesn’t want to appear to be a jerk. But if he really cared about the work, he would be less vain and would talk directly about the work.

That’s the way Steve was. That’s why he’d say “That’s shit!”, but then the next day or the next after he also would just as likely come back saying, “Jony, I’ve been thinking a lot about what you’ve showed me, and I think it’s very interesting after all. Let’s talk about it some more”.

Steve put it this way: “You hire people who are better than you are at certain things and then make sure they know that they need to tell you when you’re wrong”. 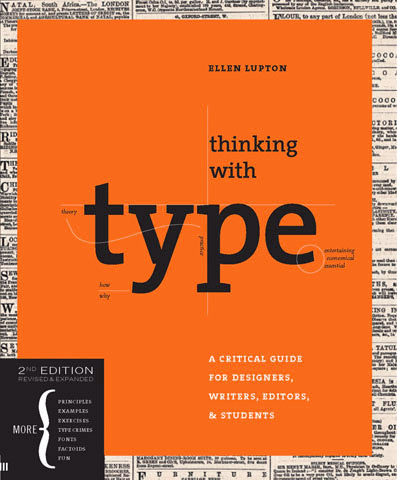 The book is split into three sections: Letter, Text and Grid. This gives the illusion of structure, but don’t be fooled. This is the most disorganized book on design I have ever read.

There is no narrative. Ellen jumps from topic to topic as if each spread was from a separate book. She would write about obscure InDesign hotkeys, font licensing, HTML header tags and even proofreader’s marks without any coherence. Sometimes she would pretend the reader has no idea about computers at all: did you know, she would ask, that if you press Shift+Enter instead of Enter, you would get a new line, but not a new paragraph?

Ellen would explain how typeface is not the same as font. Then put a spread of some student works of questionable value. Then write half a page about “branding”. Because why not write about something, if such a thing exists? It feels like Ellen just crammed together everything she heard about typography giving no crap as to how these random facts, thoughts and examples would help anyone get better at anything. None of the topics is given any care, many are given just a couple of paragraphs.

As to author’s credibility, I have to say she thinks that a double prime (˝) is the same as dumb quotes ("). She sets HTML is small caps, but CSS is all-caps — on the same page, that is. She would also explain that CSS is Cascading Style Sheets (very helpful). At some point in the book she mentions Tufte, then tries to redesign a table and comes up with a result that shows that she either did not actually read Tufte or completely missed the point.

If you are new to design and typography, after reading the book you’ll go, wow, there’s so many stuff — I guess I will now have to find real books to figure it all out. Well, just go straight to Tufte, Bringhurst, Tschichold and Müller-Brockmann.